This election year, American voters are once again being asked to sort through the cacophony of inflammatory rhetoric, hilarious sound bites and campaign promises in order to choose their next president. An essential part of a candidate's call to action is their visual self-representation.

A strong visual self-presentation, usually cleverly encapsulated in a logo, speaks of self-confidence and self-awareness. A campaign logo should not only communicate the strength and patriotism of a candidate, but also feel true to that candidate as an individual, pointing out the ways in which they are unique among a field of prospects.

One design challenge campaign logos present to the lucky few that create them is this: the logo must balance the crushing pressure to conform to the highly recognizable clichés of American patriotism with a particular candidate’s unique core vision.

Most of this election cycle's logos are just a mush of patriotic half-thoughts and sigh-inducing blah-ness. All I can see in those mushy logos are clichés (stars, stripes, a soaring eagle) and bad type. Mike Huckabee’s looks like a butt crack farting stars, Scott Walker cribbed a corporation’s logo to emphasize the least important letter in his name, Bobby Jindal’s just looks like a candy cane (a missed cross-promotional opportunity?), Kasich and Santorum feature poorly set type complemented by uninspired graphics, and Chaffee, Graham and Pataki didn’t even try. 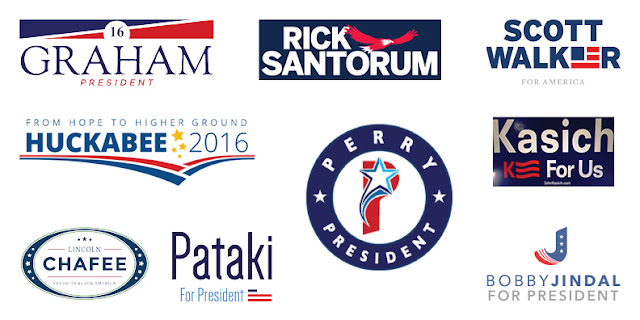 The worst campaign logo, though, belongs to Rick Perry. I look at it and I am immediately beset by questions: why is the centered red letter P such a strange shape? Why does the shooting star have so many colors? Who thinks that setting his name at a size only slightly larger than the word “President” below it looks good?  This logo is far from self-confident and self-aware, it basically says to me “I will be a puppet leader guided solely by focus groups.” This one is just pure mush.

In a class above those rejects are the logos of Ben Carson, Chris Christie, Marco Rubio, Bernie Sanders and Donald Trump. They rely more on clean and simple typography. Happily, they restrain themselves to a single patriotic gesture: one star or the colors of the American flag. Notably, though, Trump doesn’t make any direct patriotic gesture in his logo, nor does he reference his tendency to slap his name, max size, in all caps and 24-carat gold on almost anything else. His logo feels uncommitted somehow; I can see why so few people believed him at the beginning when he said he would run for president.

The only memorable logos in this batch belong to Rubio and Sanders. They both go for a very approachable feeling, communicated almost entirely by the typesetting. Bernie’s just gone for his first name and Rubio’s decided he’s so humble he won’t capitalize his. They both, however, disappoint in the details. The waves under Bernie’s name chop up the slabs at the base of the type, creating useless visual detritus. Rubio, like Bernie, has decided to elaborate the dot on the letter I, and for some reason he’s chosen to shrink the continental US to fit there. From far away it looks like a smear and from up close you realize what it is and there’s absolutely no payoff.

My favorites this year include Carly Fiorina’s sweet and simple use of the star motif, Rand Paul’s seamless integration of the torch of freedom into his name, Ted Cruz’s stars-and-stripes flame, Hillary Clinton’s “click here” arrow, Brian O’Malley’s speech bubble and, my number one, Jeb Bush’s exclamation mark.

Jeb’s logo has been widely derided as a way for him to avoid using his family name, and has been mercilessly ridiculed to great effect on late night television, but it remains my favorite. The round letters, slightly over-size exclamation mark, even just the sound of the name feels warm and casual. I think his campaign would have done a better job defending it if they had just rolled their eyes and said, “Of course he’s a Bush. You all already know that. Why would we waste time advertising that.” That aside, I would have liked a bigger ball terminal on the J to balance out the huge dot on the other end. Where this logo succeeded in communicating approachability, it failed in communicating strength and excitement. The only reason people noticed was because the candidate himself didn’t exude either of the later traits.

Ted Cruz’ flame has a definite religious connotation. Evangelical religions commonly use the flame to represent the Holy Spirit. This logo must have been very tightly rendered: too wild a flame would bring to mind a burning flag, and too solid a shape would have resembled a tear or a raindrop.

Hillary Clinton’s arrow logo is a very middle-of-the road. There’s nothing much to react to, positively or negatively. It just is, like a traffic sign or a medical form. This isn’t a purely negative criticism, because the comparison is to two quotidian objects that may not inspire but are functionally integral to their respective uses. Looking at Hillary’s logo from that angle makes me think that it gets the job done, no muss no fuss, and time will tell if communicating that about herself will draw voters or leave them cold.

For some more design commentary from the likes of type designer Tobias Frere-Jones and designer Sagi Haviv, Politico made a slideshow.
Posted by Loide Marwanga at 2:44 PM